How to Avoid the Deadly Dog Days of Summer 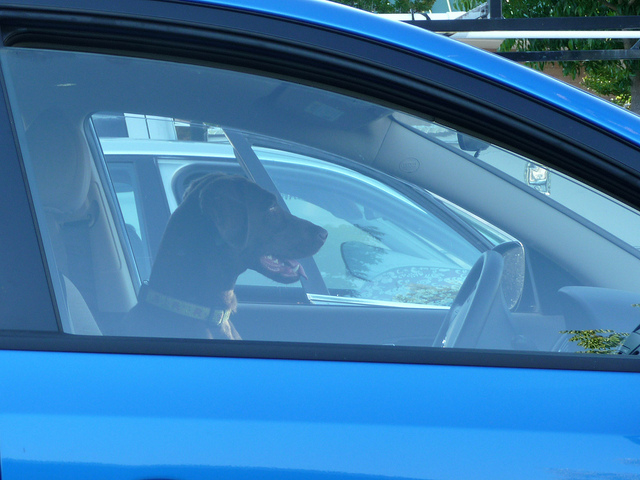 Every summer, I dread hearing the news — another dog left to die a slow, miserable death after being left in an overheated car. It’s a senseless and easily preventable tragedy, but it happens each year as soon as warm weather rolls in. A Florida police dog named Diesel died after being left in a squad car. A mother dog and her nine puppies were left in a car in the San Francisco Bay Area for about six hours, killing three of the puppies. And the warmest weather is still to come. The good news is that laws are changing, and more people are learning about the danger of leaving animals in hot cars.

Contrary to popular belief, leaving a window cracked open does virtually nothing to alleviate the heat.

Being stuck in a room at a temperature of 90 degrees or higher would be miserable for any human, but it’s especially dangerous for dogs because they don’t have the same cooling mechanisms as we do, and don’t cool off as easily. As a result, locking a dog in a car can be a death sentence, even on mild days.

Though every summer we hear dozens of stories of dogs suffering and dying in hot cars, we’re making progress. Legislators are increasingly aware of the dangers of hot cars, and 31 states now have so-called “hot car” laws on the books. That’s up from 15 states in 2014.

Initially, most hot car laws were simply prohibitions on confining an animal in a motor vehicle and endangering her safety, usually due to extreme temperatures, but more recently hot car laws have included so-called Good Samaritan provisions—granting immunity to a person who attempts to rescue an animal from a vehicle. Today, nine states have “Good Samaritan” laws on the books.

Even with the recent growth of hot car laws, their scope varies widely across the states. Some of the laws apply to all animals, and others only apply to cats and dogs, while still others include any domestic or companion animal, or even children. Furthermore, Good Samaritan provisions sometimes restrict liability protections to certain public officials, empowering law enforcement officials to break into a car to rescue an animal but not private citizens.

A comprehensive legal approach to saving animals from suffering and dying in hot cars must include Good Samaritan laws that permit any person, including private citizens, to rescue animals from cars in certain situations.

For example, in Florida, state law grants civil immunity to a “person who enters a motor vehicle, by force or otherwise, for the purpose of removing a vulnerable person or domestic animal” if the person takes a number of steps including calling 911 first and using no more force than necessary to enter the vehicle and remove the vulnerable person or domestic animal. Similarly, in Tennessee, a person is immune from civil liability for “damage resulting from the forcible entry of a motor vehicle” to remove a child or animal if similar steps to those required in Florida are taken. Most recently, Arizona Governor Doug Ducey signed HB 2494 into law, which protects people who come to the aid of an animal or child locked in a car. Additionally, the Oregon legislature has a “hot car” bill pending granting criminal and civil immunity to civilian rescuers.

Even if your state doesn’t yet have any hot car laws, those who leave animals to die in cars can sometimes be prosecuted under a general animal cruelty law.

How You Can Raise Awareness

Even if you never come across an animal locked in a hot car, you play a part in ending this seasonal tragedy. The Animal Legal Defense Fund (ALDF) holds an annual campaign to educate people about the dangers of hot cars and prevent needless animal deaths.

Our windshield sunshade is an easy way to inform your neighbors that a locked car can be a death sentence for a pet even if it’s not a particularly hot day. Sunshades can be purchased on the Animal Legal Defense Fund website. We also have ready-to-print flyers and social media share graphics to help spread the word. Make sure you know the hot car laws in your state, then take your advocacy to the next level and work to encourage improved laws.

Know How to Save a Life

If you do find a dog left in a car, quickly try to locate the driver and tell her that the dog could be hurt or killed. Stores will often page customers over their loudspeakers if you ask a clerk for help. If you can’t find the owner, always call 911. Even in a state without laws about dogs left in cars, police or emergency workers should attempt to help an animal in distress. Whatever you do, don’t just walk away and hope for the best. You may be the animal’s only hope.