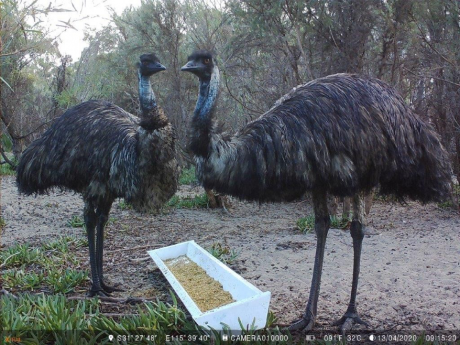 The Australian Bushfires earlier this year ravaged the country’s flora and fauna, killed an estimated 1 billion animals, and left surviving animals at risk of starvation. Countless young animals, including kangaroo joeys, are now orphaned and left to fend for themselves in a terrifying new world where vital habitats in Australia’s unique and iconic ecosystem, have been decimated and stripped of critical food and water sources.

The Yanchep National Park and the Stirling Range, two biodiversity hotspots in Western Australia, lost a significant number of animals, especially reptiles and kangaroos, along with 13,000 hectares of bushland. In the midst of such devastation, SPCA International provided support grants to four organizations in Western Australia (WA) and Kangaroo Island working on-the-ground to address the needs of animals. One of the recipients, Wildlife Care WA Inc., launched a feeding program, which is now helping thousands of animals including kangaroos, lizards, birds, wallabies and more sustain themselves in the aftermath of the disaster.

Since January 2020, Wildlife Care WA Inc. members, other wildlife groups, registered rehabilitators, and volunteers have been maintaining eight food and water stations three times per week in the Two Rocks, Yanchep, and Wilbinga areas. The effort will continue for the foreseeable future as the natural environment recovers. Although occasional rains have helped heal the area, it will take time to see enough growth to sustain the wildlife that survived the bushfire event.

The grant from SPCA International also enabled Wildlife Care WA Inc. to purchase two game cameras, which they rotate around the feed stations to record activity. Footage from the cameras in addition to other observations have produced valuable insights into the wildlife being supported and their behavior, which has been enlightening. Through scat and other signs, the Wildlife Care WA Inc. team has found evidence of increasing numbers of kangaroos, emus, birds such as pink and grey galahs, Carnaby’s cockatoos, tawny frog mouths, bronzewing pigeons, and parrots as well as insects in the fire zone!

Although the Two Rocks, Yanchep, and Wilbinga areas have seen great progress, much more work is left to be done. On top of addressing the aftermath of the fires, Wildlife Care WA Inc. is responding to other challenges. For example, they have jumped into action during Joey season to take in many extremely young kangaroos (pinkies) orphaned due to current land clearing practices and vehicle collisions in the Perth Western Australia Metropolitan area.

Additionally, as the COVID-19 pandemic continues, the organization has changed the way they are caring for Western Australia’s animals. In maintaining the feeding program and other initiatives, staff are practicing social distancing, with no more than two people in a vehicle at once. Volunteers are also provided with documentation to travel through regional border check points that have been established to minimize the spread of the virus.

With additional aid, Wildlife Care WA Inc. looks to continue their important efforts. They are already in the process of ordering a trailer, increasing their capacity to transport a water tank and supplies for restocking the food and water stations. These resources will be made available to other animal welfare groups in the next fire season who will be supporting wildlife displaced by fire events.

You can show support to organizations like this one working to protect animals via SPCA International’s grants to grassroots organizations by donating.