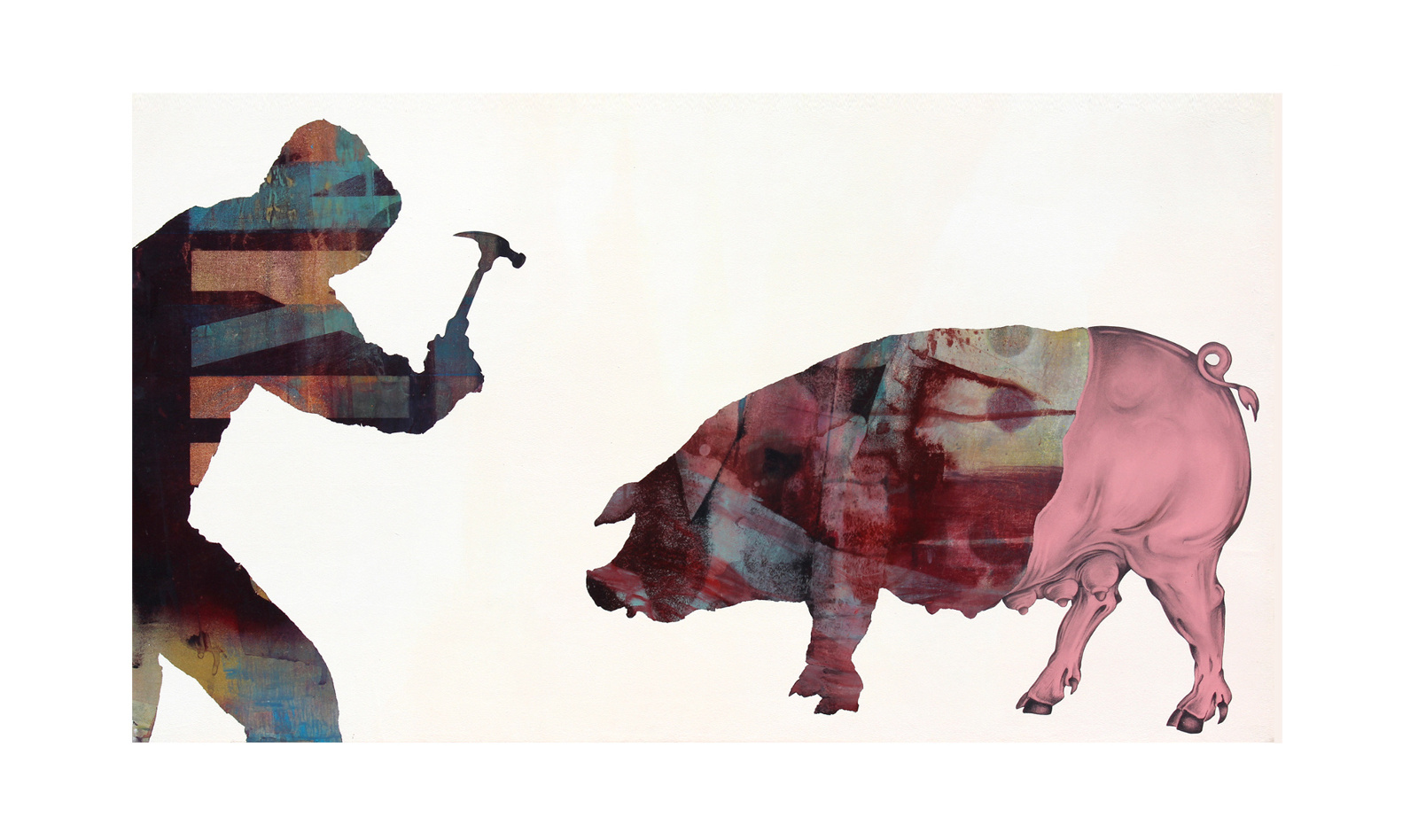 In the factory farming system, animals such as goats, chickens, pigs, and cows are rarely considered as anything other than a commodity. When we deny the emotional intelligence of these animals and see them only as units on a production line, we never get to discover how playful, loving, and downright funny they truly are. In many ways, they are very similar to the cats and dogs whom we love so much. Luckily, a growing number of pioneering artists and photographers are now choosing to focus on the plight of these animals, in an attempt to expand people’s awareness of who they truly are when they are allowed to be free.

Sue Coe grew up near a slaughterhouse in Hersham, England, and as a child, was accustomed to hearing noises such as screams and the rattling of chains emanate from the building. At the time, she was not encouraged to question the practices of the slaughterhouse, but after becoming more immersed in political art as an adult, she said, “I want to know how much that childhood knowledge effects collusion in later life … where one is trained not to question, not to be curious, not to make demands on things that could be wrong.”

In her ground-breaking works, “Dead Meat” (1996) and “Cruel” (2012), she shone a harsh spotlight on the truth behind how animals are treated by the factory farm system. She believes that people’s apathy towards the plight of animals has come about partially because “humans are being factory farmed, trained to look away and just consume, never question, live in fear and debt, and die quietly and efficiently.” 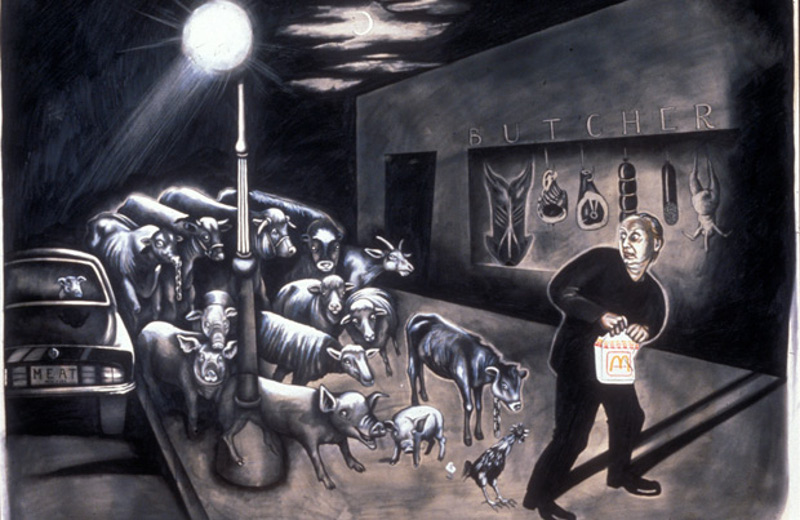 New York artist Dan Witz has become well-known for his searing portrayals of societal problems. Two of his recent projects, Empty the Cages (2014) and Actual Victims (2016) focused on the plight of farmed animals. These projects – which took place in  London and Washington D.C. respectively – involved the installation of thought-provoking street sculptures, aimed at making people consider the heartbreaking reality behind factory farming.

As Dan described it on his website, “It wasn’t until the anti-whistleblower ag-gag laws began passing in the United States that my attention was drawn to America’s animal agriculture industry. Further exploration revealed unbelievable depths of abuse – perpetrated not only against farm animals, but also the environment. Climate change, deforestation, wildlife extinction, water waste, air pollution and ocean dead zones (among other things) are all directly attributable to meat, dairy and egg production.” 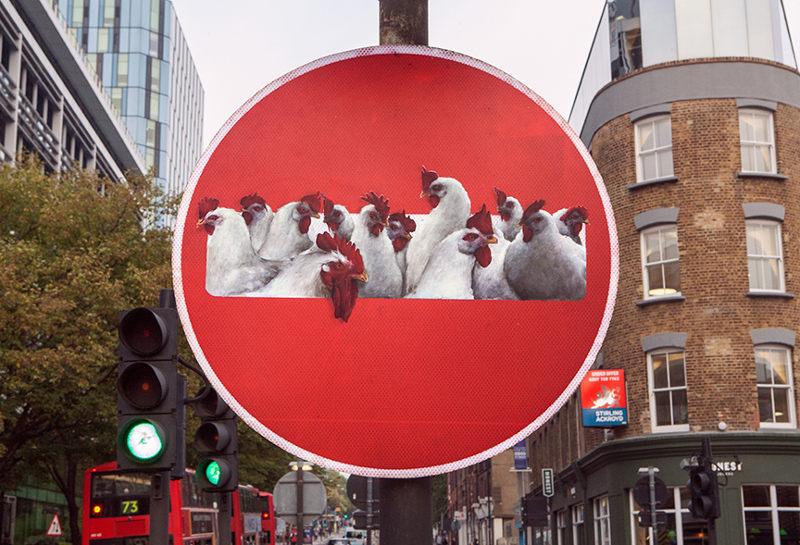 Tamara Kenneally is an Australian photographer who regularly features rescued farm animals in her work. She has worked alongside a number of animal rights charities and sanctuaries throughout Australia, including Edgar’s Mission, to help change audiences’ perception of farmed animals.

She also runs a sanctuary of her own in North East Victoria called Lefty’s Place. Lefty’s Place was named after a sheep she once cared for, who passed away in January 2013.

Tamara describes herself as “committed to portraying animals as the individuals they are and providing viewers with each animal’s true self and story, so they be aware that farm animals are so much more than just a food source.” Her projects (which can be viewed here) include A Pig’s Life, The Price of Eggs, and Animal Transport. 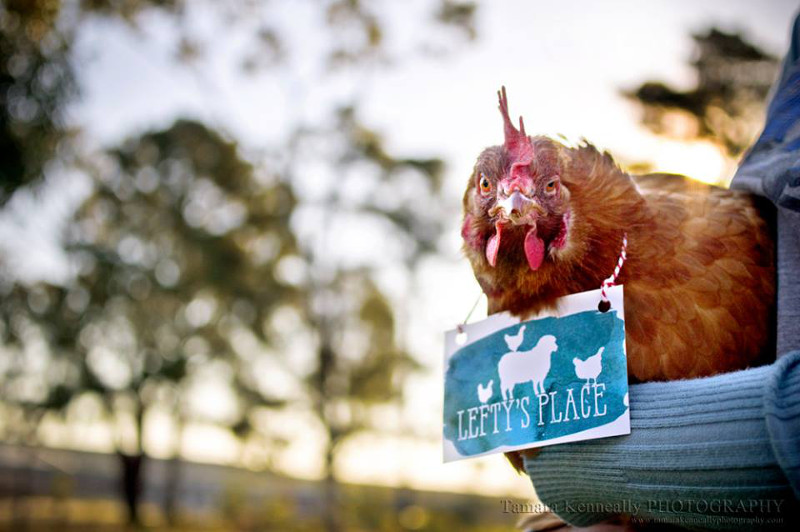 Sculpture and print artist Gale Hart, based in Sacramento, California, has frequently turned heads with her arresting indictments of how we treat other animals. In particular, her 2010 project, Why Not Eat Your Pet, aimed to make viewers consider the underlying motivations behind their food choices by juxtaposing innocent, yet oddly chilling images of farmed animals with domestic animals, cartoons, and babies.

For Hart, her role as an artist involves taking on a level of social responsibility. “I can’t sit around and paint pretty pictures or blow people away with my talent, or all the normal things that the ego drives within art,” she explained. “I feel more obligated to talk about how we treat other species. How we treat animals reflects who we are as a society, so it’s not just about animals. It’s about who we are as humans.” 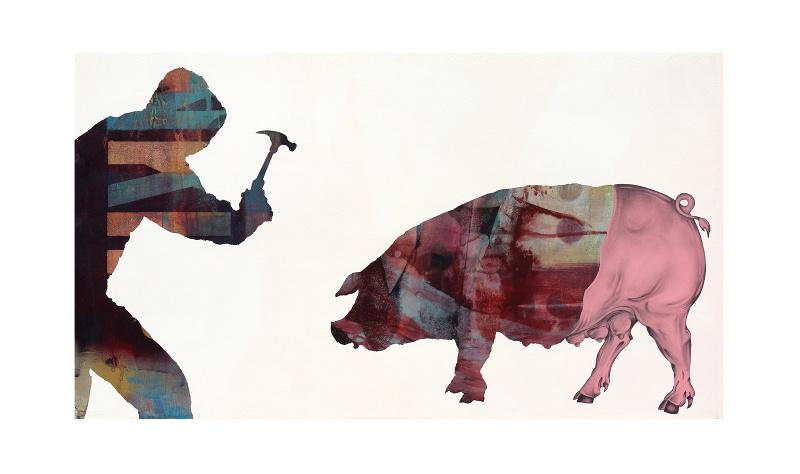 Spanish illustrator Roger Olmos is determined to use his artistic skills to help change people’s perceptions of farmed animals. He has said in an interview with Vegan Mania, “My love for animals began in infancy. I have always felt a profound love for them, and this was what inspired me to go vegan. I do not understand how millions of people can close their eyes and their hearts in the face of animal suffering, and I am not just speaking of dogs and cats. I do not support any form of cruelty towards any species.”

He expresses this heartfelt passion for helping vulnerable creatures through the production of satirical images that criticize the way humans treat other species, as well as beautiful picture book covers for children, which feature cows, birds and other animals taking part in fantastic adventures! 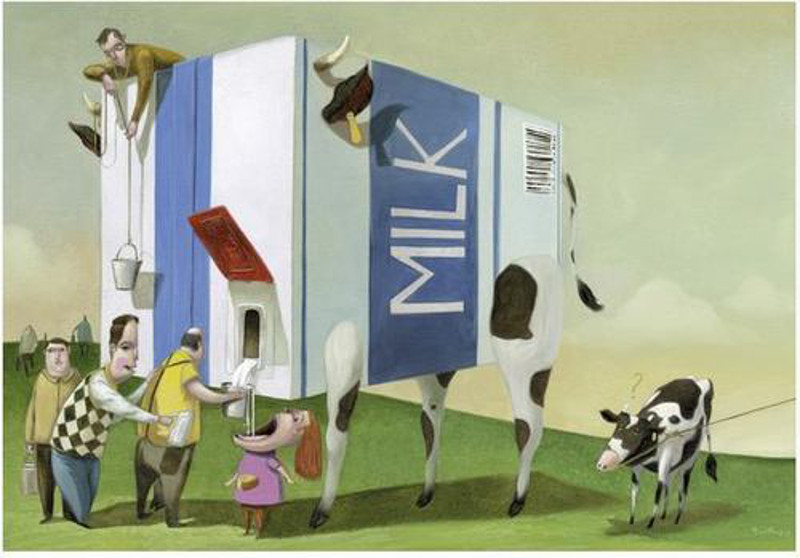 There is no doubt that these artists’ work – along with the work of many other activists who fight to change the shocking cruelty that animals endure at human hands every single day – could play a pivotal role in shifting public opinion. To learn more about the rights violations and environmental problems that are caused by animal agriculture, check out the articles below.