Are Horse-Drawn Carriages Rides Safe for the Public?

In NYC, we patiently wait for the bill to ban horse-drawn carriages – Intro 573 – to be considered and voted on by the City Council. That cannot happen until the required Environmental Impact Study (EIS) is completed. So we continue to bide our time and wait. We do not know what the EIS will reveal or what it studied. We do know, however, that there are many obvious reasons why this trade should be shut down. The unsafe character of the business is just one.

Horse-drawn carriages used in the commercial hack line trade – such as New York City – are insubstantial at best – and an accident waiting to happen. They are made from a combination of wood, fiberglass, and metal. They are flimsy. They should not be on the road with cars, trucks, buses, taxis, ambulances, fire trucks, police cars, bicycles, motorcycles, and pedestrians. Yet they are. They are even allowed to work in highly congested Times Square.

Do not think the problem will be solved if the drivers only work in the park. Central Park is wall-to-wall people — walking, jogging, cycling, skating, plus pedicabs, drummers and street performers. It is not “Sunday in the park with George” – nor is it an idyllic Georges Seurat painting. It is Times Square without the cars.

The classic carriage weighs about 1,000 lbs, it is open, it does not have seat belts. In comparison, an average automobile weighs about 4,000 pounds; an average city bus weighs 36,000 fully loaded; a city fire truck loaded with water and equipment can weight about 56,000 pounds.

So WHY are these dangerous contraptions still allowed on city streets? The carriages are made for looks — not for safety.

The Issue of Seat Belts

A word about seat belts from Las Vegas:

“First it [Las Vegas City Council] allowed the rides, but only if carriages had seat belts and the horses had been acclimated to traffic noise. Later, those requirements were dropped. The argument against seat belts was that insurance companies didn’t like them as they made the rides more dangerous — if a horse got spooked, the passengers wouldn’t be able to quickly jump out.”

Do they not even understand what they are saying – which is – horse-drawn carriages are so dangerous that the insurance companies will not provide insurance if there are seat belts because it is “MORE DANGEROUS” and the likelihood that a horse will spook is always there and passengers will need to be able to jump out quickly.

Pictures speak a thousand words. Here are a few.

NYC, 2006. Spotty spooks and crashes into a car. One dead horse, 3 injured people. 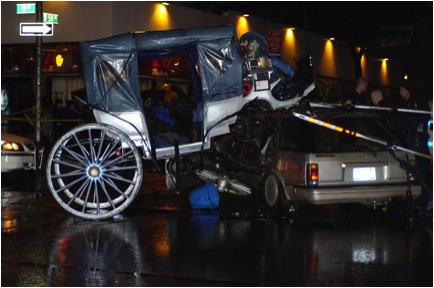 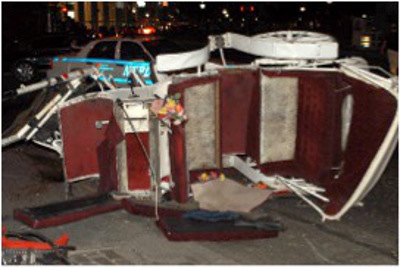 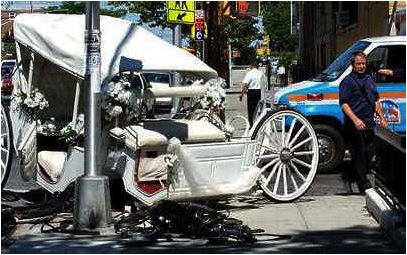 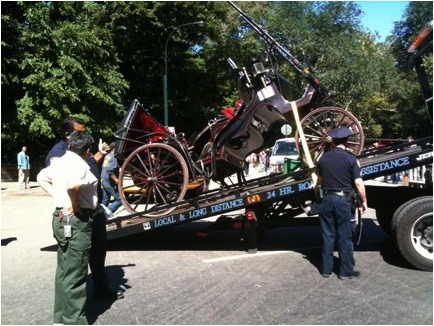 What do Insurance Companies Say About Horse-Drawn Carriages?

“Even with the closest attention and care to carriages, riders, horses and traffic, unforeseen accidents and resulting lawsuits do occur.  Horses can bolt from a variety of causes: loud traffic noises, firecrackers, speeding cars, cigarettes flung from a passing vehicle — even accidental instructions to the horse can cause an accident. Passengers can be thrown, pedestrians can be trampled or kicked, a harness might break enabling a horse to run free, or a runaway horse can cause other traffic accidents to occur. Injuries such as these may occur, but the chances can be dramatically reduced with sound risk management practices in place and General Liability policies for coverage in the event of such an accident.

Having a signed waiver/release form for all clients should be mandatory. Parents or legal guardians should sign a waiver for minor riders (in addition to the minor’s signature). These waivers are extremely important for the business owner because the waiver offers some protection from the amount of damages in the event of a lawsuit. The best protection for you and your carriage business is to have both Accident and General Liability insurance with sufficient limits.”

This is not done in NYC.

At the same time, the City of NY requires this insurance for pedicabs.  Why is there such a big difference?

While New York City is in the process (be it slow as it is) of considering action to phase out horse-drawn carriages, there are many other cities that have yet to recognize the danger of these tourist traps. New Yorkers and everyone else can call the NYC Transportation Committee members and ask them to vote in favor of Intro 573. We can all play a part to help end to this antiquated practice by refusing to ride and spreading awareness for the potential damage these carriages can cause.