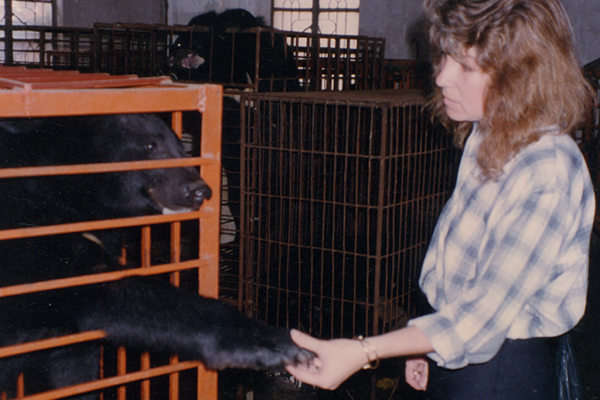 When Animals Asia Founder and CEO Jill Robinson moved to Hong Kong with her husband in 1985, more than a decade before founding the organization, she wasn’t quite sure what she would do there—but she firmly believed that the move was a part of her path.

Born in England, Jill had always loved animals. She secured a part-time job as a veterinary assistant while a teenager, as well as acting as pooper-scooper at a local cattery, while engaging in fundraising for international animal welfare groups.

Jill landed in the Asian metropolis of Hong Kong and quickly found the next step in her path. She was sickened by the magnitude of animal suffering she saw there and felt compelled to help. While working for local veterinary surgeons, Jill met the Asia representative of the International Fund for Animal Welfare (IFAW), David Dawson, and began working with him to document cruelty throughout the region. It was during this time that Jill founded “Dr Dog,” the first animal therapy program in Hong Kong, and subsequently in China, Taiwan, the Philippines, India, Japan, and Malaysia. Dr Dog continues today as one of Animals Asia’s core campaigns—helping to introduce dogs as our friends and not food to many who had not previously experienced the unconditional affection of a canine.

But it was one moment in 1993 that would change Jill’s life forever, opening her eyes to a cruelty and desperate need for help that she simply could not walk away from—this chance experience sent Jill in a new direction, eventually leading her to start her own organization, Animals Asia.

Jill first visited a bear farm in mainland China after being informed of the their existence by a friend. On bear farms, sweet and sensitive Asiatic black bears (“moon bears”) are held in small cages and painfully miked of their bile through catheters or permanent holes in their abdomens. The bile is used in traditional Asian medicine despite the existence of many herbal alternatives. Jill wanted to see this quietly prevalent and completely unnecessary cruelty for herself. During a tour of the less egregious parts of a bear farm, Jill snuck off to an area that she had not been shown. This was where the bears were held. It was a dark room and as she entered, the bears, who have the intelligence of three-year-olds, made fearful, clucking vocalizations. Looking around in horror, Jill backed into a cage. From behind her a paw reached out through cage bars to rest on her shoulder. Despite all of the pain inflicted on these bears from human hands, one of them still trusted enough to gently touch Jill. Jill turned around and took the paw in her hand. From that moment on she knew she had to help, and set out on a mission to save these highly endangered bears from the horrors of bile farming. A personal moment with one individual bear sparked the inception of an organization with a mission to rescue them all. Two years later, in 1995, Jill secured the release of the bears from that very farm.

In 1998 Jill founded Animals Asia. In July 2000 she and the young nonprofit’s team signed a breakthrough agreement with Chinese authorities to rescue 500 farmed bears and work towards promoting herbal alternatives to bile and bear farming. In 2006 an agreement was signed with the Vietnamese government to rescue 200 bears.

Rescued bears come to live at the organization’s two beautiful and expansive Bear Rescue Centers in China and Vietnam, where they are given crucial medical care to treat diseases and other ills caused by their previous incarceration. At these sanctuaries the bears have lots of treats to forage for, space to play, and peace of mind.

Jill continues her mission through Animals Asia, which pays as much attention to each bear’s individual needs as she did that very first bear she found incarcerated in a dim room on a bear farm. Jill currently divides her time between living in China with the bears, living in Hong Kong with her five cats and four dogs, staying on site at the secondary bear sanctuary in Vietnam, and giving presentations on Animals Asia’s work around the world.

Jill will be in New York City for two events in April, 2012: