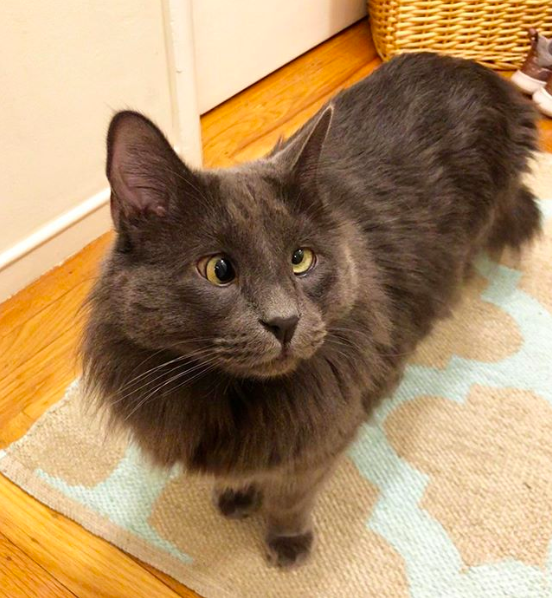 In June 2018, Rachel Krall rescued an adorable cross-eyed cat named Belarus from the San Francisco Animal Care & Control. From the moment, he became available for adoption, Belarus touched the hearts of many people with his sweet and charming personality and his adorable googly eyes, and since being adopted Belarus’ charm has helped many other shelter animals by raising funds.

Krall told Insider that the moment she saw Belarus’ photo, she was enamored and just knew she wanted to bring him into her home. So many people were interested in adopting Belarus, that the shelter hosted a lottery, but Krall thinks she was chosen to care for him due to her experience and knowledge about cats. Well Belarus went to the right home because Krall isn’t selfish with Belarus. She shares his adventures with the world and uses it as an opportunity to pay it forward.

It’s Thursday!! Purrfect time for a #throwback! Here’s a blast from the past that I hope helps to start your day off right 😸

When Krall was chosen to adopt him, the other people who were interested in adopting him requested that she create an Instagram account for him. She obliged and since his rescue, he has healed and recovered tremendously. When he was adopted, he was underweight with a bald spot, slight cold, and a broken tail.

To all of you unhappy about the prospect of returning to the office today… just picture my head on your lap as you work. I promise it makes the day go better 😸 #data

Since then, he’s gained four pounds and Krall says he has come out of his shell and is very sweet and affectionate. He loves cuddling and makes her laugh.

Guess what?! There’s only one week left on our sweatshirt campaign. I can confirm that they are 100% comfy and 1000% stylish. Also, we’re guaranteeing arrival before Christmas and all proceeds are going to animals in need as we’ve partnered with @sfanimalcareandcontrol and @cattownoak 🐕🐈 How’s that for a good Cyber Monday buy?

As Krall told Insider, they were able to donate $6,000 to local animal shelters last year from proceeds raised by selling t-shirts like the one above.

You can follow Belarus’ adventures and take a look at his merchandise on his Instagram account. If you’re inspired by his touching adoption story to give a cat or dog their furever home, check out 5 Reasons Why Everyone Should Adopt a Pet and 7 Reasons to Adopt Your Next Furry Best Friend.