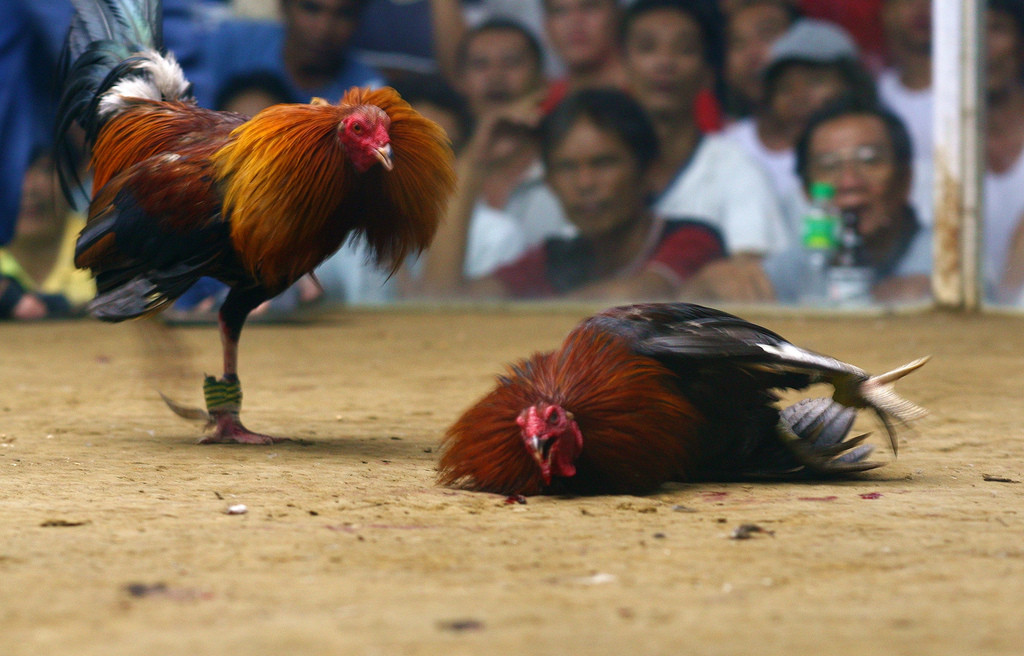 Our history is littered with gruesome and cruel pastimes involving the abuse of animals as a means of entertainment, and while most of these activities have long been made illegal, they are by no means gone for good.

Cockfighting, for instance, is a blood sport that has been around for hundreds of years and is one of the most atrocious events imaginable for the poor birds involved, yet in many countries around the world, it is still considered to be a mainstream activity and an integral part of the culture.

During a cockfight, two cockerels are placed into a ring and are forced to fight until one of them is dead or so badly injured that it can no longer fight. As if this isn’t cruel enough, to increase aggression, the cockerels are tormented by having their beaks and feathers pulled in order to make them angry, and all of this goes on with a crowd of cheering and shouting spectators, creating a truly terrifying experience for them.

Birds who do not die during the fight are very often so badly injured and exhausted that they are killed anyway. Some common injuries that the cockerels receive include punctured lungs, pierced eyes, broken bones, and deep cuts. What’s more, there is no way for them to escape when they are hurt and want to back down from the other cockerel.

1. Cocks are armed with spikes

Cocks naturally fight with each other in the wild to establish territory or mating rights, but in these instances, serious injuries are rare as they back away and leave the area when they accept defeat. In the cockfighting ring, they are routinely armed with blades or spikes which are attached to their feet. These “gaffs” tear at the skin causing horrendous injuries, especially when the other bird is unable to escape.

2. Cocks are mutilated in preparation for fighting

As part of the training and preparation process, cockerels usually have their combs and waddles (skin under their beaks and atop their heads) cut off to avoid them being injured during a fight. Some also have the spurs cut off their legs so that sharp gaffs can be attached.

3. Cocking means only the “toughest” survive.

The life of a fighting cockerel is tough, from the moment they hatch until the moment they die. They endure a lengthy training program which is designed to weed out the weaker ones from the batch so that trainers are left with only the strongest, most ferocious birds. The birds who do not make the cut are simply killed, and those who are deemed good enough to fight are sure to endure a painful and cruel death in the ring.

4. Cockfighting is often surrounded by other illegal activities

One of the main reasons people attend cockfights is to gamble on the outcome, yet there is evidence that shows that underground cockfights are a common occurrence and that there is a large scale illegal circuit of trainers and fight organizers. In addition to the illegal cockfights themselves, there are usually many other illegal activities taking place at the event including gambling, drug-taking, and gang violence, with one cockfight in Northern California resulting in a triple homicide.

5. In some U.S. states, cockfighting is only considered a misdemeanor

While cockfighting is now illegal in the U.S., in some states, it is still only considered to be a misdemeanor offense and not a felony. This means that although the activity is against the law, it is not considered to be a serious crime, which sends out the wrong message and doesn’t offer adequate deterrence or protection for the animals involved.

Cockfighting may be an underground activity in the U.S., but this doesn’t mean that it should be a case of “out of sight, out of mind.” More needs to be done to expose illegal operations so that no more birds have to endure this barbaric treatment. Worldwide movements are also needed to highlight the true cruelty behind this popular cultural blood sport so that we can put an end to it once and for all.