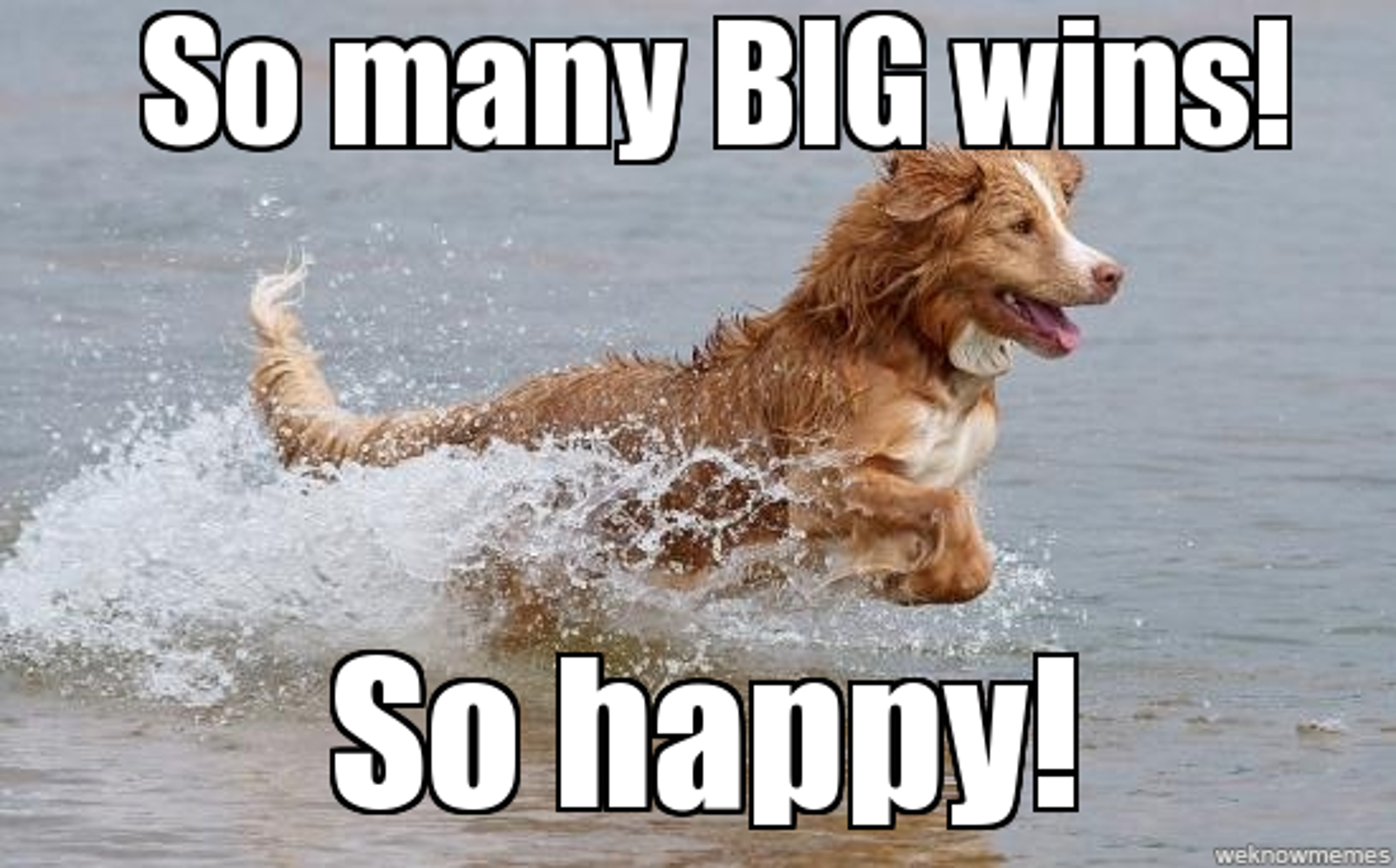 This year, 2013, has been quite a year for animals. Yes, we do have a long way to go as many injustices and cruelties still exist, but we are slowly stamping out others, and we should have no shame in celebrating these victories, no matter how small.

Thanks to the work done by amazing nonprofits, shelters, rescues, sanctuaries, and individual animal lovers, we are working together to create a more humane and more sustainable world like never before, and this is something we should all be proud of.

To celebrate just a handful of the amazing things done this year in the name of animal protection, check out our round-up below of 13 BIG wins for animals from 2013!

1. The European Union and India Ban the Sale and Import of Animal-Tested Cosmetics!

Earlier this year, the European Union (EU) announced its sweeping ban of animal tested cosmetics and toiletries that includes goods made within the EU as well as “any goods that are outsourced for production and then distributed in Europe,” as reported by Victoria Hoff on OGP in February.

India also stepped up to the plate this year with a ban on animal-tested cosmetics sold in the country and has just announced that a provision will be added to the law requiring that all cosmetics imported into the country are also free of animal testing. Yippee!

Why it’s a big deal: The EU’s ban on animal-tested cosmetics is the largest in the world as it spans 28 member states including Austria, Germany, France, Greece, the Netherlands, the U.K, Sweden, Ireland, Italy, and others. Such a big commitment by the EU and subsequently by India, one of the world’s most populated countries, highlights a big shift away from cruel testing procedures and a move toward a more human animal-testing-free future.

2. Costa Rica to Close Its Zoos!

In August, Costa Rica announced that it would close ALL of its public zoos by May 2014. The animals currently held at the zoos will either be released into the wild, if deemed fit enough, or sent to enjoy the rest of their days at more spacious rescue centers.

“We are getting rid of the cages and reinforcing the idea of interacting with biodiversity in botanical parks in a natural way,” Environment Minister René Castro told the Costa Rica Times. “We don’t want animals in captivity or enclosed in any way unless it is to rescue or save them.”

What a wonderfully powerful statement!

Why it’s a big deal: Costa Rica is setting a great example for the rest of the world, showing that a country can deal with other issues along with ones concerning animals, so if they can do it, we can too!

3. West Hollywood Becomes the First Fur-Free City in the U.S!

No other city in the U.S. has taken as much action for animals yet as West Hollywood (WeHo). The city prohibits the sale of animal-tested cosmetics, the use of steel jaw leg-hold traps, cat declawing procedures, the sale of dogs and cats, and the use of exotic and wild animals in performances. And just this year, WeHo has taken another step in protecting animals by becoming the first-ever fur-free city in the U.S!

Why it’s a big deal: WeHo is setting a precedent for the rest of the U.S. by becoming one of the most humane cities in the country, showing that it is possible to go cruelty-free on a larger scale.

4. Los Angeles Bans the Use of Bullhooks in Circuses!

This fall, Los Angeles’ City Council voted unanimously to ban the use bullhooks, baseball bats, ax handles, pitchforks, and other implements used on elephants and similar animals in circuses. Circuses that come into the area have three years to choose what they will do – either treat their elephants more humanely or remove them completely from their shows.

Once the ban goes into full effect after this three year prohibitory period, “any traveling shows that feature elephants cannot perform anywhere in the city if they use bullhooks to train or handle their animals, meaning that these circuses will be prohibited from performing within the city.”

Why it’s a big deal: Not only is it awesome to see LA joining other U.S. cities and counties in banning the use of bullhooks, but the city’s ban is also important because it was spurred by the release of undercover footage, showing that this type of work can indeed secure long-lasting changes for animals.

5. The U.K. Bans ALL Wild Animals in Circuses (and India Bans Elephants)!

The U.K’s ban on all wild animals in circuses came as huge news this October, but the country’s decision was in the stirrups for a while as one group argued that not ALL wild animals should be banned. Yet the British Parliament finally decided that “such an exception [made] little sense as there is no basis for protecting just a select group of animals,” thus a full ban was set into motion and will go into full effect by 2015. Woohoo!

Just a month later, India took a step in the right direction too by banning the use of elephants in circuses. The country’s ban was prompted after nine months of undercover footage from PETA India and Animal Rahat which revealed widespread abuse of circus elephants.

Why it’s a big deal: Animal circuses are notorious for their poor treatment of animals, and abuse has been documented at many, and so both the U.K’s and India’s decisions illustrate that this type of treatment will not hold in the modern world – that one day soon perhaps even more countries will get on board with similar bans.

New Zealand waters are home to 113 species of sharks and now they are all set to be protected from shark finning thanks to New Zealand’s fall announcement that it will ban this cruel practice once and for all!

Why it’s a big deal: While shark finning is alive and well, more and more countries and companies are turning their backs against it, and every small step is one move in the direction of a complete ban on this cruel practice worldwide.

7. Polish Army to End Use of Animals in Military Training!

This November, PETA announced that the Polish Armed Forces will stop the use of animals in military trauma training, which included the “deliberate mutilation and maiming of pigs and goats,” wrote OGP’s Aisling Maria Cronin.

Why it’s a big deal: Poland’s awesome decision to end the use of animals in military training procedures proves that safer and more humane testing alternatives exist — so come on other nations of the world, get on board, too!

At the start of December, 30 nations from around the world signed an agreement to adopt 14 measures to protect wildlife crime victims like elephants and rhinos, effectively criminalizing poaching in Germany, the United States, Zambia, Nigeria, Zimbabwe, Botswana, Thailand, Vietnam, the Philippines, and the great surprise: China, among other countries.

According to Bloomberg, the agreement “includes[s] classifying poaching as a serious crime, strengthening cross-border law-enforcement and reining in demand for ivory in Asia with information campaigns.”

Why it’s a big deal: Just when so many of us were about to throw in our hats, countries came together and finally did something to deter the poaching of threatened and endangered species – a HUGE step in the right direction.

9. H&M and Other Major Retailers Stop the Use of Angora Fur!

A recent undercover investigation by PETA made headlines this winter when video footage revealed that employees at an angora fur farm in China plucked the fur off angora rabbit while they were still alive – an unimaginably painful experience. The investigation spurred H&M to immediately stop the sale and production of garments containing angora rabbit fur, and clothing companies Esprit and New Look soon followed H&M’s move.

As of Dec. 20, H&M announced that it will make its ban on angora products permanent, “effective immediately.” Zara, ASOS, and PVH Corp. (the parent company of Calvin Klein, Tommy Hilfiger, IZOD, ARROW, Van Heusen and others) have also confirmed a ban on angora fur products.

Why it’s a big deal: PETA’s investigation set off a domino effect in the fashion world and showed that companies can indeed change their ways, which will ultimately save many angora rabbits in the long run.

Signed into law by President Obama just a month ago, the Chimpanzee Health Improvement, Maintenance and Protection Act facilitates the transfer of nearly all research chimpanzees to sanctuaries. 50 chimps will still remain with the National Institutes of Health, but 310 others will finally find their forever homes at sanctuaries across the U.S.

Why it’s a big deal: This move marks the coming end of chimpanzee research in the U.S. As NIH Director Francis S. Collins told Aljazeera America, “New scientific methods and technologies have rendered [chimp] use in research largely unnecessary.” Woo!

“Blackfish” emerged as the documentary-to-watch earlier this summer and then, thanks to its screenings on CNN, became a worldwide sensation, spurring a huge backlash against SeaWorld and forcing us all to take more critical look at animas in captivity.

Why it’s a big deal: Much like “The Cove” did with the Taiji dolphin slaughter, “Blackfish” has brought another injustice against animals to light in a very big way, and has since served as one of the biggest wake-up calls for people around the world. Now more than ever people are aware of what goes on behind the walls of marine parks like SeaWorld and are starting to rethink their activity choices by choosing not to support SeaWorld with their dollars, or in the case of musical artists, their performances.

We’ve done numerous stories on “Blackfish” and SeaWorld this year. Take a look at just a few of them below.

12. Phoenix Bans the Sale of Dogs and Cats in Pet Stores!

Just this December, Phoenix, Ariz. joined the ranks of 40 other cities in banning the sale of dogs and cats in pet stores. The decision was passed by the Phoenix City Council by a vote of 5-3. Awesome!

Why it’s a big deal: Over 2.7 million cats and dogs are put down in shelters every year in the U.S. and while Phoenix is just one city, it can certainly help lower this staggering number now by encouraging residents to adopt rather than shop for their four-legged companions.

The city of New York has just announced its soon-to-be ban on horse-drawn carriage rides!

According to OGP’s Aisling Maria Cronin, Major elect Bill de Blasio “formally announced his plans to end the horse carriage trade once he takes office in 2014.” Once the ban is official, the animal carriages will be replaced by “Great-Gatsby” style electronic vehicles that were designed by Jason Wenig.

While many tourists are angry about NYC’s decision, their amusement is not of concern here; rather the proper treatment of horses is what’s important, and these horses will finally be free from stressful city noise and hours on end of work very soon! Woohoo!

Why it’s a big deal: For years, animal lovers and animal advocacy organizations have fought to bring NYC’s carriage horse industry to an end, which has been riddled with issues. Ultimately what this ban means is that hard and persistent work can definitely pay off big in the end, and should inspire us to push for even more of these victories in the future!

Happy New Year, Green Monsters, and cheers to a fantastic 2014 for the animals!