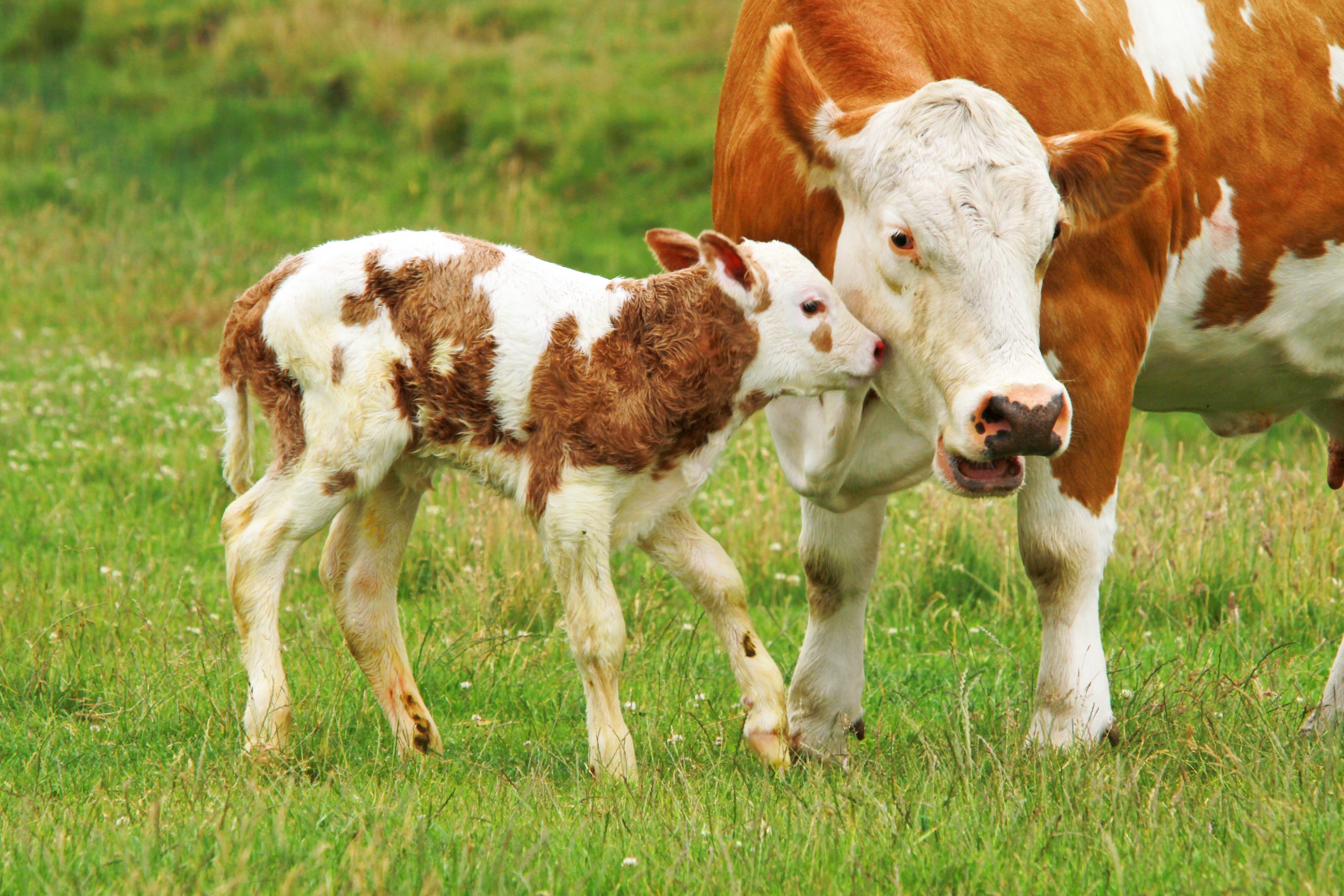 Cows are such sweet, intelligent, and loving animals. Sadly, they are victims of animal agriculture and suffer immensely so people can drink their milk and eat them.

Those of us who don’t consume animal products often hear something along the lines of “I could just never give up cheese!” Sadly, people view cows and other animals as mere products, rather than the complex individual beings that they are. People steal their milk from their babies who are then sent to veal farms where they will endure terrible conditions and treatment until they are slaughtered. Like every other animal, cows do not deserve to be on someone’s plate.

Life on farms can hardly be called “life” at all considering the abuse and neglect that the poor cows suffer. Fortunately, some cows do get the chance to actually live. There are many farm animal sanctuaries that rescue cows from these cruel, inhumane conditions and allow them to live in peace. Here are 10 adorable videos of rescued cows that prove they should never be on anyone’s plate:

Salvador was born on a dairy farm in Chile and thus, set to become a veal calf. He was taken from his mother, denied adequate nutrition, and forced to live in a tiny 2×2 wooden crate. He became very ill, but fortunately, AnimalLibre was able to rescue him. Now he lives at Santuario Igualdad Interespecie, a Chilean farm animal sanctuary, where he is properly cared for and given so much love. Look at how calm and happy sweet Salvador is – laying on the grass beneath the warm sun, breathing in the fresh air, and snuggling one of his caretakers.

Ericka was a dairy cow who was going to go to slaughter because her arthritis prevented her from standing and walking. Fortunately, a woman decided to help rescue this cow from the horrible, yet common fate that was to come. When Ericka arrived at her new home at Rancho Compasión and saw the beautiful pastures, she took off running. It turns out that Ericka didn’t actually have arthritis, she actually was sitting in protest of the terrible treatment that she had to endure. Ericka still loves to run around and is so happy to be free.

Daisy was rescued from an “educational” dairy farm, where children learned how to milk cows. Each time she was forced to give birth, her mastitis got worse and thus, she had a difficult time giving milk. Her struggle to produce milk made her unprofitable so the farm owners were going to send her slaughter. Fortunately, her caregiver reached out to Pasado’s Safe Haven so that she could be rescued. Now she spends her days grazing in a sunny pasture, surrounded by people who love her. She has learned to not only trust people again, but also love them.

John Lewis Thunderheart was born at a slaughterhouse and as a result of the stress and facilities, he became extremely sick. Fortunately, he was rescued by the Gentle Barn. With amazing care and lots of love, he began to recover and now is doing so well! Look how happy he is playing with Sky the dog and their stuffed hedgehog! There’s a reason why people like to call cows “grass puppies.”

In January of 2020, Woodstock Farm Sanctuary rescued two dairy cows, Jo and Aph, from a small farm near Ithaca, New York that was going bankrupt. Mother cows and the baby calves were chained separately, crying out, but unable to get each other. The cows received medical treatment for the various ailment caused by the inhumane treatment and conditions that they are subjected to in dairy farms. Sadly, Aph passed away during emergency surgery, but Jo was eventually moved to Woodstock Farm Sanctuary to live out her life peacefully. When they opened the gates to the large pasture that Jo would get to live on for the duration of her life, she ran around with joy and excitement for her newfound freedom.

Jerome was born at a small dairy farm and thus, was going to be sent to a veal farm. However, one of the farmworkers loved Jerome and convinced the owner to let her find a home for him, which ended up being at the Farm Sanctuary. When Jerome arrived, he was scared and disoriented, after all, he had just been taken from his mother. But, then he met Liz and instantly fell in love. Liz and her calf Cashew had arrived from another small dairy farm a few weeks before Jerome. She was producing way too much milk for just Cashew but was still a bit unsure of the other little calf. Jerome persisted and eventually, she took him in as her own. Now, they’re one happy family that will never be separated from each other.

Pippi was born with a terminal heart condition, so the farm she was born at relinquished her to the Farm Sanctuary where she met her best friends, Poppy. When Poppy was away at the vet, Pippi missed her friend so much and would start crying. But then, Forrest arrived. Forrest was born with leg injuries that made it difficult for him to stand and walk. Rather than slaughtering him, farmers surrendered him to the Farm Sanctuary. Once he arrived, he immediately clicked with Pippi, who acted like an older sister to the calf who lost his mother at such a young age. Both Poppy and Forrest had a difficult time walking when they arrived at the sanctuary. With the love and support of the sanctuary staff, veterinarians, and each other, they have gotten so much better. Look at how well they’re doing in this video! They love to run around, play with each other, and keep each other company. It’s remarkable how healing friendship could be for these two rescued calves.

If you’d like to help animals like Pippi and Forrest, you can donate to the Farm Sanctuary here.

Mabel was born sterile and unable to walk so the dairy farm that she was born at contacted the Barn Sanctuary. They picked her up and took her to the animal hospital, where they found out that she also has a heart murmur. Fortunately, this girl is getting amazing treatment and has been fitted for prosthetics. She loves living at the sanctuary and spending time with her new big sister Cora Jr. This video of Mabel licking a popsicle is too cute! Gotta get those electrolytes!

Staci was born unable to stand up or walk. The owner of her farm decided that if no one could come rescue her within twenty-four hours, that he would kill her. Freedom Farm Sanctuary came as soon as they could to save this sweet calf. They gave her so much love and even built her this wheelchair to help her walk! Look how happy she is to finally be able to run and jump around. They also made a lighter one that was easier to move! Sadly, the sanctuary had to let Staci go because her health was deteriorating, but she got such a beautiful few months of life that most cows like her will never get to experience.

Kelly, a horse rescuer, came across Valentino before an auction of veal calves. He was disabled and workers were sticking him with canes to get him to move along. Because of his disability, Valentino was considered unmarketable and thus, Kelly was able to rescue him and bring him to the Farm Sanctuary. They got him immediate veterinary care and he started to recover from some of the health issues that he was suffering from. He still had leg issues, but Valentino was a fighter and excited to be free. Because of his dwarfism, Valentino was placed with animals that were closer to his size: sheep. Valentino was happy to be with them and wanted to hang out, but the feeling wasn’t mutual. Fortunately, despite his size, Valentino fit in perfectly with the special needs cow herd. We’re so happy for this sweet boy!

Learn How to Make Plant-Based Milk and Meat Dishes at Home:

Undercover footage from Erath County Dairy Sales and Dick Van Dam Dairy has recently come out. It shows working severely abusing the animals in cruel ways that are also dangerous for public health. Sign this petition to tell the USDA to charge those responsible at ECDS and Dick Van Dam Dairy with animal cruelty, and force these facilities to close their doors!