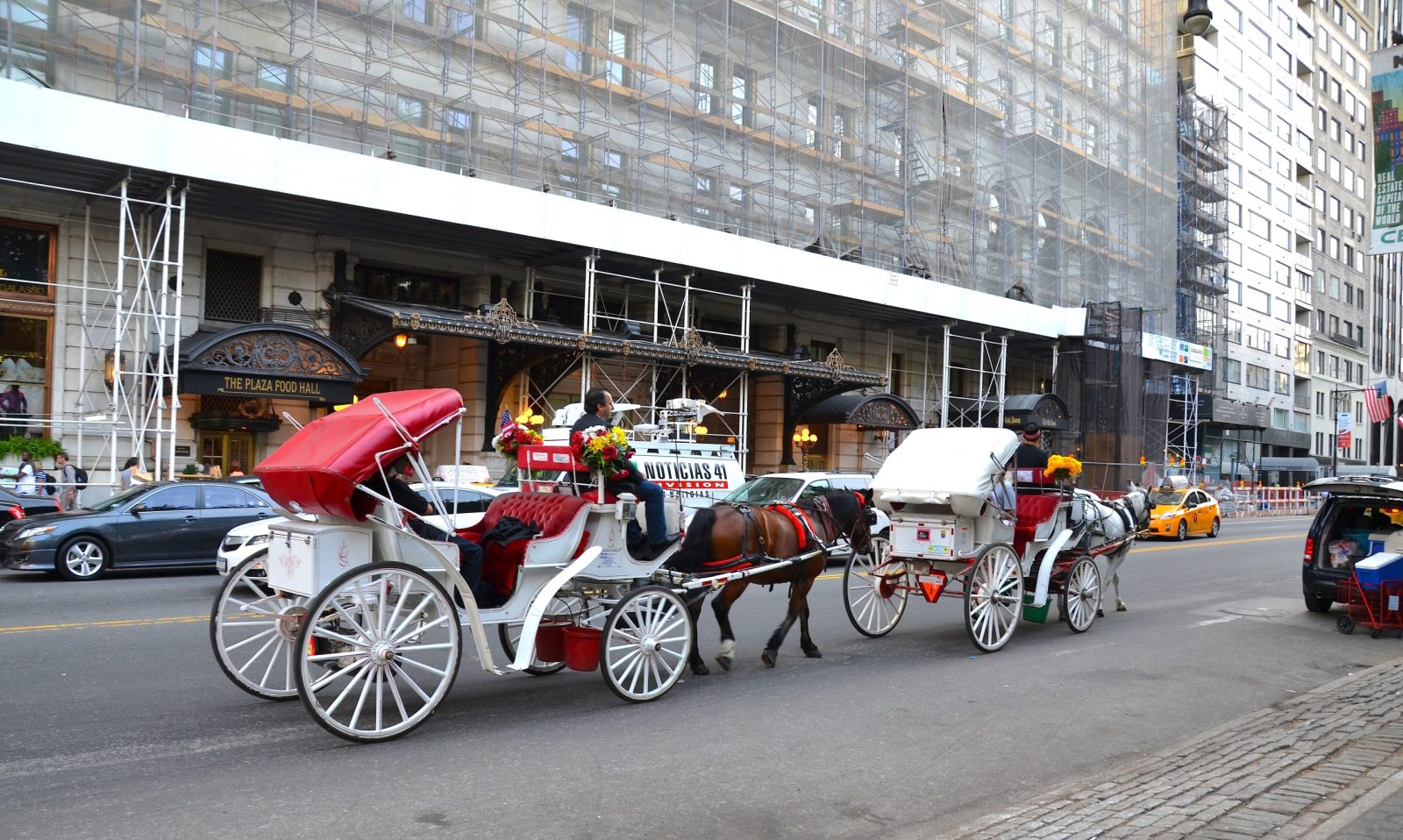 Groups in New York City are demanding emergency action by the city council to fast-track a bill to phase our horse carriages in the city after the latest horse collapse.

A horse violently collapsed on pavement this week and was beaten by its driver in Manhattan. It was an extremely hot day, and a video taken by a witness shows the driver hitting and whipping the horse with reins trying to get the animal to stand back up and keep working.

The horse, named Ryder, fell on the pavement on 45th Street and 9th Avenue in the Hell’s Kitchen neighborhood of Manhattan. The horse was not able to get up for over an hour. The horse appeared to be in heat distress and dehydrated, and no veterinarian was present to give care.

Onlookers in the area were outraged at the driver’s abuse of the exhausted animal. The police arrived and attempted to cool down the animal by spraying it with cold water before the horse was eventually able to get up.

“Yet another carriage horse has collapsed in distress on the hot pavement of New York City as onlookers express shock and horror while the animal is repeatedly beaten. This latest incident illustrates how insane it is to force these animals to pull heavy carriages in extreme heat in the busiest part of the busiest city in America. How many more horrific tragedies will it take to end carriage horse abuse in New York?” said Edita Birnkrant, NYCLASS Executive Director.

The group that represents horse carriage drivers said that the horse was examined and found to be suffering from a neurological disease, but animal activists are not sure that is the truth. It would not be the first time a condition of an overworked animal was blamed on something other than exhaustion.

However, a witness came forward with disturbing time-stamped photos of Ryder hours before the collapse, confirming that he was unwell before, going against the industry’s claims that it happened “without warning.” The witness, Caroline Smidt, saw Ryder looking distressed and malnourished and gave a firsthand statement about what she saw that day, saying, “I was at Central Park on Wednesday 8/10/222 at 1:15pm with my husband and daughter taking pictures when I saw the horse that’s all over the news now [Ryder]. This horse immediately caught my attention because he looked very different from the other horses. I could see his ribs protruding, he was walking with his tongue out and was having trouble walking. He was walking very slowly. I also saw and heard the driver [Ian McKeever] hitting, yelling, and cursing at the horse because he wasn’t moving fast enough, causing a ‘traffic jam’ of horse carriages as a result. The driver kept yelling and screaming at the horse to move even though he had customers in his carriage.”

“My heart shattered to pieces for this beautiful animal, I had to cover my daughter’s eyes so she wouldn’t see this inhumane act. No child should experience this, and especially not in Central Park.”

“As soon as I saw the video and news stories about the collapsed horse later that evening, I knew immediately that it was the horse I had seen struggling in the park hours earlier. The pictures I took of the horse were taken at 1:15 pm, and I later found out that the horse collapsed on the street at around 5 pm. I was shocked to learn that the driver continued working the horse that was struggling, and in such bad condition, for several hours after I had witnessed how much he was suffering.”

“I’m begging you to please investigate the driver and help remove this beautiful animal away from him. This man needs to be brought up on charges and this industry must be investigated.”

NYCLASS, PETA, and other groups are calling for an investigation into the incident and for an update on the horse’s condition from an independent veterinarian.

“In addition to offering immediate placement for the horse into a sanctuary and proper vet care, we are calling for an investigation into what led to this life-threatening incident, as well as an update on the condition of this horse. We are also calling on the City Council to take action and pass legislation to phase out carriage horses and replace them with a humane alternative. The world is watching and everyone can see that half measures are not working,” Birnkrant said.

A bill is being introduced by Queens Democratic Councilman Robert Holden to finally replace horse-drawn carriages with electric ones by June 1, 2024. The legislation would give horse drivers preference for licenses to operate the new electric carriages. It also requires them to be paid prevailing or union wages set by the city comptroller.

Horse-drawn carriages and horse rides are not quaint and romantic! These poor horses are subject to walking for hours on end in sometimes extreme weather without adequate breaks. We need to work toward banning carriage rides and protecting these animals from being exploited!

If you are a resident of NYC, please make a call or email to your NYC council member and ask them to “sign on as a co-sponsor to Intro 573 to replace suffering, dying carriage horses with cruelty-free electric carriages.” NYCLASS says to make sure to tell them what district you live in, and the list of Council members can be found here.

NYCLASS says that if you don’t live in NYC, please call Council Speaker Adrienne Adams at 718-206-2068 or email at [email protected] and ask her to use her voice and power as the head of Council to “END horse abuse by supporting Intro 0573  to replace deadly horse carriages with cruelty-free electric carriages!”

While you’re at it, please sign this petition and tell New York that it’s time to end horse-drawn carriage rides.