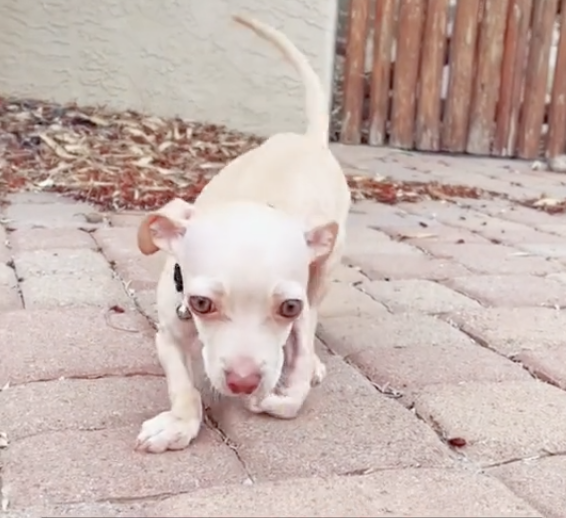 Meet Turkey. This boy arrived at Sky Sanctuary Rescue after a fellow rescuer reached out for help. It was discovered that his entire family was in an unsafe situation, so the sanctuary took in his mother, father, and his siblings. Turkey was a product of unethical backyard breeders who allowed a brother and sister to reproduce, and was about a third of the size of his littermates and had some abnormalities in his walk and physical appearance.

Sky Sanctuary Rescue knew that it would be a long road to recovery, but they were determined to keep him alive. They took him to his new foster home and provided proper care and nutrition. Although he quickly started to gain some weight, after about six weeks of being in his new home, Turkey began having gran mal seizures.

“We hurried to hospitalize him at VetMED Emergency where the seizures continued over the next forty-eight hours. There are only two MRI machines in the valley but thankfully,  Veterinary Neurological Center was able to squeeze Turkey in on an emergency basis. The MRI revealed exactly what was going on in Turkey’s little brain. He had a condition called hydrocephalus and in Turkey’s case, it was considered severe,” said Sky Sanctuary Rescue.

Now that Turkey finally had a diagnosis, the doctors created a precise treatment plan for him, and he has not had a single seizure since! Not only is he seizure-free, but he is no longer experiencing any other symptoms of his neurological condition.

“He is THRIVING in a home, adored by his foster family, receiving weekly physical therapy + all-around best care possible… simply because YOU, our supporters, thought Turkey was worth fighting for,” said Sky Sanctuary Rescue.

Thanks to the hard work of the sanctuary, Turkey and his family now have a second chance at life!

Neglect goes hand-in-hand with the horrible living conditions that dogs in puppy mills and backyard breeding facilities are subject to. Many dogs will never leave their cage except for breeding. Sadly, they are so neglected that these poor dogs usually do not receive any veterinary care for the various ailments that breeding causes them.

Federally there is only one law that regulates puppy mills: the Animal Welfare Act of 1966. This act doesn’t provide much protection for the dogs as breeders can breed as many dogs as they’d like and keep their dogs in tiny cages 24/7. While it is very important to push for stronger regulations of dog breeding at a state and federal level, the best, most immediate way to help these animals is to not support dog breeders!

Sky Sanctuary Rescue is a nonprofit organization that consists of a small group of passionate animal advocates that specialize in the humane capture and rescue of stray, fearful, and injured animals from the streets of Phoenix, Arizona, and the surrounding desert areas. If you’re interested in helping them on their mission, you can donate here.

You can also keep up with their rescues on Instagram and TikTok!